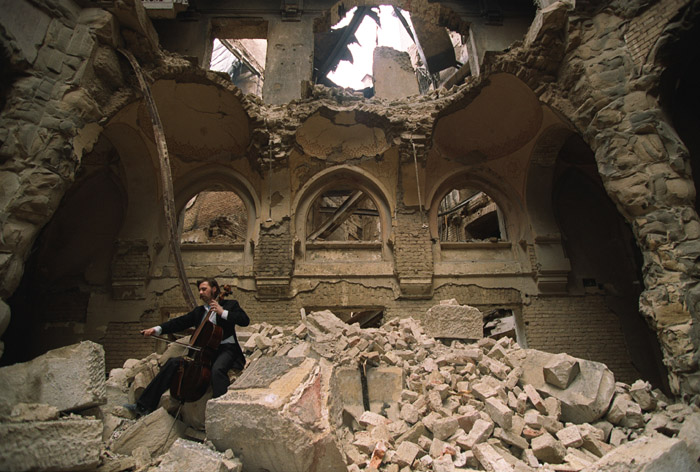 “Rehearsal did not take place.
Srabian is dead.
Petrov is sick.
Borishev is dead.”

This is an excerpt from a journal entry by Karl Eliasberg, conductor of a rag-tag orchestra that was asked to play Shostakovich’s Seventh Symphony during the siege of Leningrad in World War II. They were instructed to rehearse the newly written music and perform it in the Grand Philharmonic Hall. By that time, Leningrad had been under siege for over a year. People were eating rats, horses, and their pets. Thousands had already died of starvation.

The little orchestra lost three members during the weeks of rehearsal. Weak from hunger, sometimes they only played for 15 minutes before giving up for the day. Eliasberg mentions a trumpet player who could not produce a single note one day, and that some of the musicians could not lift their instruments to their mouths. The wind players in particular, were prone to fainting from the effort of playing.

Nonetheless, on August 9, 1942, the orchestra of starving musicians performed the entire symphony. They had only managed to get through the whole thing once before–three days prior to the performance. Speakers had been wired all over the city for everyone to hear the music. It was broadcast on the radio so the Russian military could listen, and speakers were also aimed over the walls, toward Hitler’s army encamped without. The Russian troops were sent out on a particularly harsh raid, in an effort to push the Germans back and prevent them from bombing the city during the concert.

Despite the poor artistic quality of the performance (the musicians struggled to finish), there was a one hour ovation from the audience—and it is considered to be one of the most important artistic performances of the war because of the psychological impact it had on both the Russians, and the Germans. Eliasberg commented, “in that moment, we triumphed over the soulless Nazi war machine.” On hearing the music, many of the German troops wept. In an interview years later, some of them said it made them believe they would never take the city, whose people were so brave and defiant.

They were right; though the siege continued for another year and a half, in the end Leningrad (better known today as its original name, St. Petersburg) was never given over to the Germans.

During the time I was working on Olu’s portrait last summer, there were two very distinct and different things happening in the world outside my studio walls:

First, there were protests happening all over the country about police violence against black people. Shootings were happening in retaliation and people were taking to the streets in response to verdicts that were being questioned in regards to the true justice of the situation.

Second, my friend Timothy’s best friend Keith lay in a hospital, hundreds of miles from home, hovering near death.

Far removed from either of these, I started in on a new portrait of a man who just happens to be both black, and a former police officer. As my country descended into anger and fear, I pondered how to mix African American skin tones correctly.

One day as I worked, preoccupied by the latest news of unrest and violence, the story of the Cultural Revolution in China started whispering in my mind. Launched the year before I was born, this movement swept through China with a vengeance that is startling to read about. Simply having an education put one in jeopardy of arrest and imprisonment. Shades of the French Revolution, when any man, woman or child born with the wrong heritage was condemned to death.

Both of those sound utterly ridiculous. But it is important to remember that isn’t where they started. Sometimes things start with an innocuous idea–something like, “I think the majority of our citizens have become too far removed from their roots, and the work it took to make us a prosperous nation.” But taken too far, bereft of wise leadership and common sense,  such ideas have, in the past, descended into anarchy.

I heard the news about the protests here in the present US: race against race, police against citizens, citizens against police. Riots. Police barricades. Burned out buildings. There was talk about deportations based on religion. Fringe groups that had long been despised started showing their presence more brazenly, and finding support for their views.

At the same time these events and thoughts were running through my mind, Timothy called to tell me that Keith, already fragile from a lifelong, progressive illness, was in the hospital. He was on a respirator and couldn’t talk. He was in so much pain.

I had posted an early work-in-progress photo of Olu’s portrait on facebook, showing the underpainting and just the start of his face. Later that day I got a message from Timothy: “Watching Olu come to life is poetically haunting for me. He seems to be a spirit and silent guardian angel of music and sound emerging from the canvas. I feel his notes and the strength of the lion pushing me through my day. I needed that painting today. Thank you for letting it be in my newsfeed.”

Driven by sorrow from what I was seeing on the news, hearing the tears behind Timothy’s voice when we talked, I painted. I painted because that was all I could do. Late into the night, every night, I painted Olu’s beautiful pink fingers, his restful face. I sat through my job every day counting down the hours until I could get back to my studio, barely taking time to eat. I took a new photo and sent it to Timothy each night when I was too tired to paint any more and had to stop.

I typically give myself two months to complete a portrait from start to finish. I painted Olu in two weeks. And I titled the painting not only as an homage to the subject, but also as a message to myself.

Painting Olu’s portrait during a time of great unrest in our country didn’t change any of the outcomes. But it felt like I was painting in protest of the events, bringing in a measure of peace, if only to my own studio. Many people have told me that they are inspired by Olu, and why I chose to paint him for the FAMOUS series; he is now a non-violent confrontation counselor, working to stem the progression of domestic violence from adult to child. Seeing the progression of the work helped Timothy find strength to face whatever news may have come to him each day (Keith, by the way, made a fairly miraculous recovery and is again home with his loving family).

History has shown us time and time again, that every once in awhile an entire society collectively loses its mind. When that happens, the horrors that are unleashed make the rest of the world draw back aghast. And when that same society eventually awakens from its demonic frenzy, it is aghast as well.

Then the questions are asked: How did this happen? How could decent people allow this to happen? What led up to it? How could it have been stopped?

And the inevitable affirmation: Never Again. Never, ever again.

I feel we are teetering on the edge of something. The last six months have shown that we are so much more divided, and there is so much more anger and fear at work in our country than I had dreamed. Things we thought couldn’t happen here, are happening. Something has been awakened, and it remains to be seen what the repurcussions will be.

As I was driving to the store last weekend I heard a brief phone interview with a man who lives in the city of Aleppo, Syria. He was asked to comment on the situation, as he and other people were trapped, under active attack from both the Syrian rebels and the Syrian government fighting to win control of the city. I waited to hear fear, or confusion, or resignation. There was none. “We’re talking about regular people sitting in their homes. They don’t want to live in refugee camps; they don’t want to go to Europe. They don’t want to flee. As a human being who is living this horror, I demand a cease-fire.”

I slowed the car to a stop, slack jawed. “I demand a cease-fire.” One unknown man, caught in the cross-hairs of two warring forces, in a conflict that has the attention of every major government in the world, was demanding a cease-fire. Just like that. Standing up, taking the one small opportunity chance had handed him to have his voice be heard.

It is tempting to look at such a statement and think it is insignificant. One voice does not bring about large change. One demand from an unknown civilian does not stop a war. His statement will not make any difference.

But turn again to our great teacher, History, and we realize that governments and politicians have long understood that one person, one voice, can indeed rouse great change.

One of my college professors once said (referring to a time of political oppression), “First they round up all the writers, then they round up all the artists.” His words weren’t idle, as we have witnessed again and again. Stalin and Hitler both enforced a state-approved style of art, and the rest was condemned. The Nazis put on the notorious “Degenerate” art show, meant to deride the artists who were working in abstract or “modern” styles. More than that, artists who were deemed ‘degenerate’ were fired from teaching jobs and banned from creating art. Putin’s Russia has warned, jailed, and outright killed artists and writers who disagree with the State. Ai Weiwei drops a Han Dynasty urn in a video, in protest of the Chinese government’s human rights violations; his studio is bulldozed and he is jailed for three months. The list goes on and on.

Everyone roots for the underdog in a movie. Everyone pulls for the forlorn hobbit, wandering over the endlessly treacherous landscape while the ever-present forces of evil try to find him. And here’s the thing: the hobbit always wins. The tiny speck of light out-does the greatest darkness every time. There may be much suffering along the way. It may take a long time. But somehow, the light eventually comes through in the end.

I believe it is time for every artist, writer, musician–indeed, every person in our addled society to step up to whatever microphone chance may hand you. Throw your voice into the vacuum that threatens to pull us down into chaos, believing that your one voice can indeed change the course of events. Raise your instrument to your lips, for as long as you have the strength.